Against Me! at the new Ciderhouse in April

The Ciderhouse opened this past week, and its already attracting big names:

For instance: Against Me! on Sunday, April 19th (the day after Wilco!). These guys will put on a show that you are sure to remember...you'll be lucky if you can stand up after the show due to all the bouncing and jumping you'll do throughout the show. Against Me! will surely bring it, so you better be ready as they play cuts off of 2007's New Wave, along with older tunes and hopefully some new ones too. Singer Tom Gabel has been playing solo shows lately, and even put out a solo record in 2008, so it's a safe bet that AM! will be playing some new stuff for us.

Tickets are on sale now, and are extremely reasonable ($10). This is totally worth it. After seeing them at Bonnaroo last year, I cannot wait to see them again, this time up close and personal here in Knoxville! 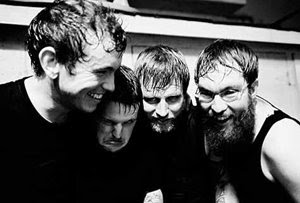 Posted by Hollywood at 8:00 AM