In Cahoots: Ben Nichols of Lucero 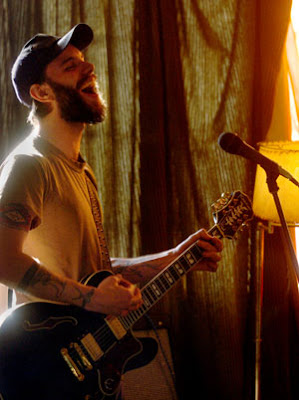 SDB: First of all, are Brian and Roy alright after their mugging and Roy's broken jaw? What happened and where?

Ben: Random kids running the streets picking fights with or sucker punching random people. Roy got hit and then a half hour later Brian ran into the same kids. It wasn't really a mugging it was simply asshole kids. About seven of them. One would punch a person on the street and the rest would scatter and run. Could've happened anywhere.

SDB: Y'all just played what seems to be your annual trip to SXSW. How were the shows? Were you able to catch anyone that we need to know about that we may not know about now?

Ben: We played five shows in two days and all of them were really good. We had the horns with us and it was a lot of fun. A pain in the ass but a lot of fun.

SDB: What's the 2010 plan for Lucero after these tour dates (including Coachella and Bonnaroo)? Any ideas or details for the next album yet?

Ben: We haven't started writing the next album yet. Haven't really had a chance to catch my breath since 1372 came out. Hopefully I'll have a little time later this summer. Probably not though... I have a feeling we're going to be on tour most of this year.

SDB: Lucero added an unmistakable Springsteen-ian-like sound with the addition of Rick Steff's keys and accordion on 2006's "Rebels, Renegades and Sworn Brothers". Last year, y'all released your 6th and major label debut "1372 Overton Park" to rave reviews and best-of lists everywhere, including my list here. How and why did the addition of the horns come about, and how does it help further Lucero's sound? What's different with a major label versus before?

Ben: All labels are really about the same. None of them want to spend any money. All of them want to own your recordings. Big or small the only difference is how much red tape you have to go through to get the same things accomplished. Touring constantly year in and year out is the only way I know to actually sell a few records. There's no easy route for a band like us. You've gotta put in the work. The horns came about because we are lucky enough to live in a city like Memphis that has a ton of great musicians in it. John C. knew Jim Spake and Jim was kind enough to put some horn parts on a couple of demo songs. We thought it was amazing and the rest of the record got shaped around that Memphis Soul idea.

SDB: How did y'all's home base of Memphis affect the musical interests of you and the rest of the group when y'all were forming back in the day? How did the town react to your sound, especially a town known for its soul, R&B and of course, rock and roll...obviously it affected "1372..." ?

Ben: Like I said there are a lot of talented musicians in Memphis. We always came from a more punk rock, self-taught, it-doesn't-matter-if-you-can't-play-guitar-write-songs-anyways approach. But over the years getting to meet and work with guys like Rick Steff and Jim Spake has really helped shape the band into something bigger. Folks around town seem to be receptive enough. Hell we're not really home enough to know what the hometown thinks.

SDB: Ben, tell us about your first solo album, Last Pale Light in the West. It is not a totally new sound and vibe as far as the album goes, but it feels like a natural progression and a logical progression in sound for a solo record. (Oh, and it's really good too...it was on my best-of 2009 list as well!) Last Pale Light sounds like it could, and should be, the soundtrack to a spaghetti western film. Did you have that in mind when you were recording it, or was that even a thought to you? What does the album sound like to you? A buddy of mine described it to me before I heard it as "just a good ol' drinkin' record"...I replied, "Well, isn't that a Lucero record?"

SDB: Before "1372 Overton Park", it seemed like y'all put out an album every year or every other year or so. How have y'all been so consistent with your music over these years, but have re-invented your "sound" over and over as it keeps getting better and better?

Ben: I think we're learning how to record a better record. The songwriting is what I think makes the band consistent. I think I'm still writing the same kinds of songs that I did when the band started, hopefully writing better, but they are still coming from the same place.

SDB: Tell us about the "$5 Cover" program that took place a couple of summers ago in Memphis with director Craig Brewer (of Hustle & Flow fame). What's the back story, the current story and what's going on with "$5 Cover" moving forward? How can we see the installments of the series, and how can we see the Lucero episode?

Ben: It's all on the internet. It was made for the internet actually. Craig wanted to do a psuedo-reality show about the local Memphis music scene. I think they're working with different directors in different cities now making new episodes.

SDB: Who do we need to know about that is coming out of the Memphis scene now that we should look into, so we can say that Ben Nichols told us so before they were big?

Ben: All the bands we toured with last fall are from Memphis. Cedric Burnside & Lightnin Malcom are great. The Dirty Streets. Everybody on that tour was good.

SDB: Just a couple more questions for you...

SDB: Do you have a favorite song that you've written? If so why and is it the same as your favorite one to play live?

Ben: Nope. I like some better than others but there's not really a favorite.

SDB: Is there a song out there that you love that you didn't write and wish you had?

SDB: What are 5 artists/records that you've been digging on lately that you might suggest to our readers? Or a few records from 2009 that we need to know about?

SDB: Who else/what are some of your biggest influences, and what did you take from them?

SDB: My fellow blogger "Davy Vegas" and I have a theory that the single greatest sound on the face of the earth is that of a well-played steel guitar. Being that you are well versed in many genres, and have been playing lately with the great Todd Beene of Glossary, and you are an obvious fan of the "old sound", is this a theory you can support or do you have other thoughts on the subject?

Ben: I don't think I believe in a "single greatest" anything. Todd Beene is pretty awesome though.

SDB: Glossary is now on y'all's label "Liberty and Lament". How did this come along? Their record from last fall Feral Fall is great by the way.

Ben: We had a distribution deal through our manager. That's basically what Liberty & Lament is and that's how we put out some of our old cds. It's a damn shame no record label will give Glossary the kind of deal they deserve so we figured we'd try to at least help get Feral Fire out there a little bit.

SDB: Ok, this is it-- My dream show of all dream shows is Lucero, Glossary and Drive-By Truckers. What's the chance of that ever happening in Knoxville, or nearby at least? I'd like to think that this show was my idea, as Lenore Kinder (who was featured in your Dreaming in America dvd) and I discussed this show lineup as far back as 2003...so I'd like to take some ownership in the show if it were to ever happen! Please make it so.

Knoxville is looking forward to the return of Lucero to Barley's Taproom and Pizzeria on Friday night. Tickets are available now or at the door. The show is being presented by WUTK 90.3 The Funhouse.

Posted by Hollywood at 1:22 PM

The most mannequin dimension that the MakerLab can accommodate is 11.8″ x 12″ x 18″ nevertheless, prints with dimensions smaller than11″ x 7″ x 6″ might be accomplished with a faster turnaround time. Please afford an extra 4-6mms on each side of your mannequin for the raft. This materials is derived from corn and as such is non-toxic and biodegradable. The NextEngine 3D scanner is an expert desktop scanner with rotating stand that is perfect Snuggle Me Organic Lounger for smaller detailed items like models, antiques, or artifacts. This scanner makes use of the ScanStudio software to seize the color and texture of an object up to as} zero.012 mm decision.