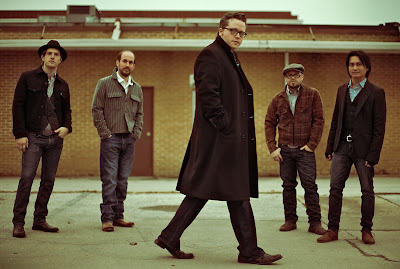 Here We Rest, new album from Jason Isbell & The 400 Unit, is set for an April 12th release on Lightning Rod Records. Here We Rest is the second album from Jason Isbell & The 400 Unit, and Isbell’s third. Their 2009 self-titled debut received high praise from the press, including Rolling Stone, Spin, Paste, Blurt, Details, Washington Post and many more.

An Alabama native, Isbell comes from a tradition of Southern music. He proudly embraces his roots, which shine through in his songs and even in the title of the new album. Here We Rest was Alabama’s original motto. However, instead of resting comfortably within its boundaries, Isbell, along with keyboardist Derry deBorja, guitarist Browan Lollar, drummer Chad Gamble and bassist Jimbo Hart transcend them. His thoughtful songwriting and warm, soulful voice are genuine, natural abilities that come through in the music.

From the soulful heartache of “We’ve Met” and “Save It For Sunday” to the country-infused folk of “Alabama Pines” and “Daisy Mae” to the old school R&B of Candi Staton’s “Heart On A String”, Here We Rest is steeped the best of southern American music. Isbell’s songs continue to reveal themselves the more you listen. From his lyrical depth to his vocals, his songs penetrate the heart and the mind, and stay with you. A true sign of great songwriting.

An Alabama native, Isbell comes from a tradition of Southern music.

I’m fascinated by how well you laid out your latest post and presented your views. Thank you, i visit your smoking blog next time.
-----------------------------------
www.bonussenzadeposito.biz
www.pokerbonussansdepot.biz
It is also sometimes keep a poker face, but you can also try to confuse the enemy, allowing him to think that you have a weak hand, when the reality is otherwise. It is important not to overdo it. When you have a good hand does not put too much. It can make you nervous players withdraw immediately thinking that they have no chance of winning, which means that you have to win the jackpot, it may be very low!
www.bonossindeposito.biz
www.bonusohneeinzahlung.biz

This blog is so nice to me. I will continue to come here again and again. Visit my link as well. Good luck
cara menggugurkan kandungan