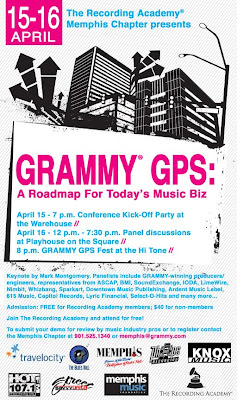 MEMPHIS, Tenn., (March 24, 2010) — The Recording Academy® Memphis Chapter will present GRAMMY® GPS: A Roadmap For Today's Music Biz on Friday, April 16 from noon to 7 p.m. at the Playhouse on the Square, 66 South Cooper St. The all-day professional development conference will feature a keynote address by co-founder of echomusic and current entrepreneur-in-residence at Claritas Capital Mark Montgomery and a plethora of music business professionals from artists to producers, mangers to songwriters.

"The Recording Academy Memphis Chapter has long been dedicated to offering quality professional development programs for artists, labels and managers in the region, and GRAMMY GPS is one of the many initiatives we offer," said Jon Hornyak, Senior Executive Director of the Memphis Chapter. "There are many talented and creative professionals who are already well on their way to a career in the business but need that extra guidance and our conference will provide them just that, incredible access to industry insiders and a roadmap to the business."

GRAMMY GPS: A Roadmap For Today's Music Biz will include GRAMMY-winning producers, engineers, songwriters and music industry executives. The conference will educate up-and-coming artists, producers and managers about the twists and turns they can encounter in today's music business and provide the necessary tools to success. The all-day conference will bring newcomers face-to-face with key music industry experts while they learn valuable skills to help them navigate the ever-changing industry.

Over the past 15 years, keynote speaker Montgomery has worked with hundreds of entertainment and corporate clients, including Sony, Kanye West, Keith Urban, RIM/Blackberry, Bon Jovi, Pearl Jam, Best Buy, Gnarls Barkley, Rascal Flatts and General Motors. He is a pioneer in the e-commerce and business-to-consumer marketing arena. Montgomery co-founded echomusic, a company focused on building communities around entertainment brands, and was the co-creator of the patented platform echotools, a direct-to-consumer delivery and data management system, which ultimately grew to serve millions of users and distribute hundreds of millions of pages, data feeds and e-commerce transitions. The company was sold in 2007 to IAC/Ticketmaster. For more information about Montgomery, visit www.hellomarko.com.

Seminar topics offered during the all-day conference include "Are You The Next Big Thing?"; "Rock And Urban Demo Critiques"; "FretWorks: Guitar Tips From The Masters"; "Lights, Camera, Soundtrack: Music & Film"; "Laying It Down: Anatomy Of A Beat"; "From The Stage To Your Web Page: Direct-To-Fan And Internet Marketing"; "Supply & Demand: The Basics Of Distribution"; "What's Your Music Worth To You? Music Licensing For A New Era"; "Passion To Profession: How To Break Into The Biz"; and "The Dream Team: Artist Personnel." Sign-up stations for ASCAP, BMI, the Memphis Music Foundation and The Recording Academy will be available throughout the day. Also, attending artists will have the opportunity to perform in between panels.

Attendees can register up until the day of the event, but reservations by Monday, April 5 are encouraged. Conference admission for the general public is $40, and the event is free for Recording Academy and GRAMMY U® members. The event will be followed by GRAMMY GPS Fest at the Hi-Tone Café at 1913 Poplar Ave. Admission to the Fest is free for conference attendees and $10 for the general public.

For more information about GRAMMY GPS, please contact the Memphis Chapter at 901.525.1340 or memphis@grammy.com, or visit www.grammy.com/memphis.

About The Recording Academy

Established in 1957, The Recording Academy is an organization of musicians, producers, engineers and recording professionals that is dedicated to improving the cultural condition and quality of life for music and its makers. Internationally known for the GRAMMY Awards — the preeminent peer-recognized award for musical excellence and the most credible brand in music — The Recording Academy is responsible for groundbreaking professional development, cultural enrichment, advocacy, education and human services programs. The Academy continues to focus on its mission of recognizing musical excellence, advocating for the well-being of music makers and ensuring music remains an indelible part of our culture. The Recording Academy Memphis Chapter, founded in 1973, nourishes the region's music scene by developing local pride in its rich musical heritage as well as creating opportunities to help independent music makers and emerging artists. The Chapter represents music professionals from New Orleans and Lafayette, La., to all of Mississippi, Arkansas and Missouri.