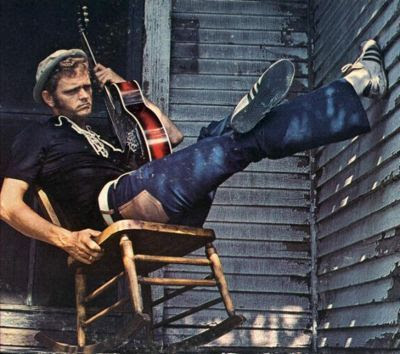 Jerry Reed succumbed to emphysema on Monday, while we were still on vacation, so our farewell is a little late. He was 71. Jerry was known not only as a country singer and musician, but more famously to the current generation as the actor that played antagonist Coach Red Beaulieu in Adam Sandler's The Waterboy. Reed's most popular role was his character/alter-ego The Snowman, in which he played in the Smokey and the Bandit trilogy. Cletus "The Snowman" Snow was the Bandit's (Burt Reynolds) partner in crime, as they bootlegged a big rig full of the then illegal Coors beer from Texarkana across the Mississippi River back to Atlanta in less than two days with the Bandit and a young and hot Sally Field running blocker in a suped-up Trans Am (they later hauled an elephant and who knows what else in the subsequent less than par sequels). Oh yeah, and they were being chased relentlessly of course, by Smokey, played by the meticulous Jackie Gleason, in one of his career defining roles. (If you haven't seen the original Smokey, do yourself a favor and Netflix it or however you get movies, get a 12-pack of Coors Original Banquet Beer and carve out two hours this weekend to reward yourself with some awesome brew and a more awesome movie.) Reed wrote and performed his most famous song, the theme song from Smokey "Eastbound and Down".

Anyways, Reed was well known as a studio musician and a songwriter within the business, penning songs for himself, and occasionally having them picked up and covered by others such as Elvis ("Guitar Man", "U.S. Male") and even modern acts like Primus ("Amos Moses"). Reed even played on some Elvis tunes. Reed combined his talents and moved into television and film in the 70s, and even appeared in an episode of The New Scooby Doo Movies.

As for Reed's impact on the entertainment industry and culture, the Atlanta native does not receive the credit that he so deserves as a musician with his chicken-scratch guitar pickin' licks, his sometimes serious, sometimes silly, sometimes novelty but most of the time tongue-in-cheek songs, his presence in both films and tv (both live action and animated) and his all around good natured, fun-filled life and persona. If you don't know about Jerry Reed, I'm glad I could "introduce ya to the boy".

Thanks Jerry- "keep that hammer down and give'em hell!"

Posted by Hollywood at 6:30 PM