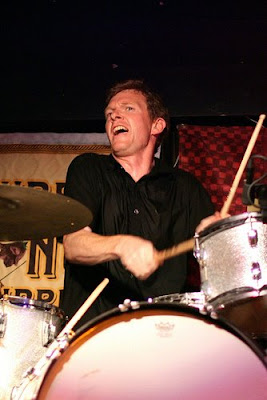 A few weeks ago, SDB caught up with Chris Phillips of the Squirrel Nut Zippers a couple of days before their Knoxville show at the Bijou Theatre on October 30th.

We asked Chris a bunch of questions, and of course, in typical drummer fashion (and sense of humor), we received some not-so-serious responses to our questions. Chris's responses were better than what I was really looking for, so it made for a great interview- see what you think. By the way, check out Chris gettin' down in the original video for their hit song "Hell" at the 1:15 mark...at least I believe that is Chris bustin' a move.

----------------------
SDB: Knoxville is really excited about y'all coming to town. Y'all were slated to perform last summer here, but if my memory serves me correctly (which it doesn't from time to time), I am fairly certain y'all ended up not playing. What happened? Despite that, we are glad to have you this time and are looking forward to the show.
SNZ: You sir are incorrect. We did in fact play and had an awesome time. Just because your bitter about missing the experience is no reason to pretend we didnt play. We did. And we had the best night of our lives. Now stop insulting me and get on with some real questions.

SDB: Y'all are no strangers to the road and touring, coming back on tour last year after a hiatus. How's it all going, especially after being off the road for a time. How is touring now different than before. Any surprises or stories that you are dying to share? Any anecdotes from the road? What are some of your favorite cities and venues to play?
SNZ: Well, touring now is vastly different than the old days. It used to be all done in Conestoga Wagons. You remember them. They were hard on the ass and short on comforts. I remember the first one we rented from this touring company. It had a seperate outhouse that we towed behind us. Everytime we wanted to pee we had to stop and go get in the outhouse. Then Indians were always attacking us. Once I even had an arrow come through the outhouse wall while I was leaving my mark. Crazy days. Now things are much better. We all have our own steam locomotives.
SDB: I am a new fan of Backyard Tire Fire, who y'all are touring with starting next week...How did they get hooked up with y'all? Did y'all had pick them out? Tell us about the Old Ceremony too, who y'all have been playing with this year. What are they like?
SNZ: Yes, BTF has paid us a huge amount of money for the privilege of opening up for us. Really the kind of money we are making off of them is obscene. More than we actually make for the concert. I am considering buying a brand new Locomotive just for the tour. It will have wonderful brown racing stripes down the side. I shall name it "The Brown Streak". We often use The Old Ceremony fiddle player, Mr Gabriel Pelli. He doesnt have his own locomotive however.

SDB: There have been several personnel changes over the years. How have these personnel changes affected SNZ? Obviously, these changes were made for the better, but what is different now than before? How is SNZ better now?
SNZ: As I recall, there are only two ways out of this band. Death or punitive legal action. Those who have left us by the first method are sorely missed to this day. Those who have moved on to pursue their legal careers are not missed at all, but do make us sore. These changes are all just part of an evolution. I cant say better or worse. Just a different beast. Strange things always happen in this band. The cool thing now is that we have perspective on our career. We can look back at the race track and see where were ahead and behind. Its better now because we all get our retirement benefits to supplement our income. AARP is sponsoring this tour in fact.

SDB: Tell us what's the plans for SNZ after these tour dates. Any talks of a new album? It's been a few years to say the least since Bedlam Ballroom.
SNZ: The band has been working in our laboratory concocting new hilarious hits, capers and operas. Even as we speak plans are being laid to make history with a brand new recording medium - an unbreakable 78 RPM CD!!! We have a live record which is going to be awesome. Great photo book, live video, interviews, mustard and relish. The works.
SDB: What else is on the horizon for y'all, both as a group and individually?
SNZ: We are planning on new studio recordings next year. We will do some touring next year also, but mainly will focus on getting or spring vegetable crops in. Then there is always the fall pruning to contend with. So any touring has to coincide with natural breaks in the harvest schedule.

SDB: During the hiatus, most of y'all had other "side" projects ranging from solo records, running recording studios, and working with other artists like the legendary Buddy Guy, William Reid of Jesus and the Mary Chain, and the Dickies.You were even the composer of Comedy Central's "Lil' Bush" show. Tell us at least about your part in these ventures and how they came to be. Obviously, these were a little different from what y'all were doing before in the Zippers. What did you take from these jaunts and bring back to the band, and what did you learn as a musician that helped make you better. How did you get the "Lil' Bush" gig? (That show was hilarious by the way!)
SNZ: Most of these projects were just extensions of who we already are. I mean, I grew up playing in punk rock bands. Jimbo is from the delta, where blues reigns. They were great things to do while we could let the dust settle from heavy years of being too busy. But as things mellowed out, we began to be interested in performing as SNZ again. So all the little things we had learned in the break have been sneaking into our new reality. Im now a cross dresser, Jimbo wears overalls, and Katharine just stands around and yells a lot. Its perfect. SNZ's sound is quite it's own, especially these days with so many groups sounding more and more the same. There's not much going on, at least around these parts, that sounds like y'all. But there seems to be more interest in the old-timey, jazzy-blues-roots music from the old days.

SDB: How did y'all get into these styles of music, and do y'all think of yourselves as revivalists for the movement in the last 10-15 years since SNZ "broke" out and really started to gain and draw attention to this type of music?

SNZ: Its funny, Jimbo and I were working in same restaurant. He and I just happened to be exploring turn of the century jazz at the same time. So like any good courtship, we started trading tapes. We made a lot of assessments from what we couldn’t hear. I mean, the recordings were primitive and you couldn’t always hear what was going on. That’s what the Zippers are doing – filling in the missing information, or at least what we imagine it to be. And that’s certainly how we play – between the lines.

SDB: Who/what are some of your biggest influences, and what did you take from them?
SNZ: [John Henry] Bonham!!! Unfortunately I was able to take much from besides being louder than anyone else in the band. God I love Zep. Hillbilly Zepplin, that’s how I think of SNZ

SDB: How did y'all's homebase of Chapel Hill, NC affect the musical interests of you and the rest of the group when y'all were forming back in the day? How did the town react to your throwback sound, especially as the end of the grunge era, just before it bottomed out, and the revival of swing, big-band and neo-jazz hit big across America? Was there an old-timey music scene up there, or just a normal college town with a little bit of everything?
SNZ: Chapel Hill was a very special breeding ground for us. At the time, Ben Folds Five, Superchunk, Southern Culture on the Skids were all quite busy. So we would all see each other when we were in town, or in exotic locales such as Peoria. That town (Capel hill, not Peoria) was very very sweet to us. We had almost immediate support. Everyone wanted us to play their weddings. Now we mainly play divorces. We are a huge divorce band. You know, like a wedding band, but not.

SDB: Besides already having a fairly extensive catalog (several albums, an EP and a couple greatest hits collections ), and without blowing your showmanship secrets and giving away surprises for the show, do you play covers or do anything in particular to surprise the crowd with that "Oh, Wow! I can't believe they are doing that" feeling and moment? Any trick or treats that y'all will be serving up to Knoxville on All Hallow's Eve?
SNZ: We usually perform along with the great Ghost of Stephen Foster video, which is pretty spooky and fantastic. There might be a Cat Power cover. And of course as we say – “Ladies and gentlemen, one night only, performing all their hits…The Squirrel Nut Zippers”
SDB: Just a couple more questions for ya... What's your favorite thing about performing live?
SNZ: Taking my pants off after the concert
SDB: Do you have a favorite song to play live, and if so what is it and why?
SNZ: She’s So Fine – Cause it makes me feel sexy inside.
SDB: Do you have a favorite song that you've written? If so why and is it the same as your favorite one to play live?
SNZ: I didn’t write it, but Hanging Up My Stockings, from our storied "Christmas Caravan" record is a beautiful thing to me. My grandfather wrote it in the 50’s. Then Jimbo gave it a new arrangement. Very sweet.
SDB: Is there a song out there that you love that you didn't write and wish you had?
SNZ: Any Led Zeppelin
SDB: What are 5 artists/records that you've been digging on lately that you might suggest to our readers?
SNZ: I love the Allison Krauss/Robert Plant Record, because Robert was in Led Zep.
SDB: Are "Nut Zippers", the candy that y'all got your name from, still around? I am not familiar with it-- Are they any good?
SNZ: They are great! Chewy caramel. Teeth pulling goodness. And yes, they are stil around. We talk to the company regularly.
SDB: Lastly, my fellow blogger "Davy Vegas" and I have a theory that the single greatest sound on the face of the earth is that of a well-played steel guitar. Being that you are well versed in many genres and instruments, I assume, and are an obvious fan of "old sounds", is this a theory you can support or do you have other thoughts on the subject?
SNZ: I can definitely get behind this. According to our research here in the SNZ Laboratories, Steel Guitar has been rated highest in over all audience satisfaction. When you factor in a can of cold Miller Highlife, the odds are that the listener will either urinate himself or herself, or explode in a spontaneous human explosion. Does that answer the question? Just ask our opening act in Chapel Hill this week. Dashawn Hickman, a sacred steel player. Rock on!