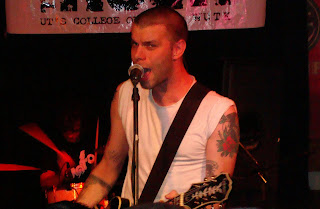 Lucero returns to Knoxville on Saturday, February 21st, for what is becoming their annual show at Barley's in the late winter/early spring months. What can be said for them that hasn't been said already? Nothing. One piece of advice: be prepared for a night of the saddest country songs, some dive-bar rockin', and to be completely covered by the time the show is over in a combination of some or all of the following: sweat, PBR, blood, High Life, cheap whiskey and tears.
If there were ever types of beer that best described Lucero's sound or their type of music, and that tasted distinctly like their music, they would be PBR and the High Life. I can't explain it, but if you have ever heard Ben and the boys in Lucero, you know exactly what I mean. If you haven't seen them, or don't know what I mean, then I suggest you be at Barley's on February 21. In all honesty, I suggest you be there either way. Put it on your schedule now- you have plenty of time.
On a side, but related Lucero note, Ben Nichols is set to release his first solo album, The Last Pale Light in the West, in January. You can snag the title track of that album here, courtesy of Aquarium Drunkard...and because I still haven't figured how to upload mp3s here for y'all to steal, err, preview for educational purposes (let me know if you know how to...). But the album is as phenomenal as seven songs can be. It sounds like the soundtrack to an old timey western movie. Check it here. You can actually "pre-order" from their site and get it now, rather than waiting for it to come out in the stores in January.
So grab a beer, or a whiskey, and settle down with Ben and give him a listen, once it "officially" comes out...or come over to the house with your favorite bottle and I'll put it on fer ya.

Posted by Hollywood at 5:00 PM