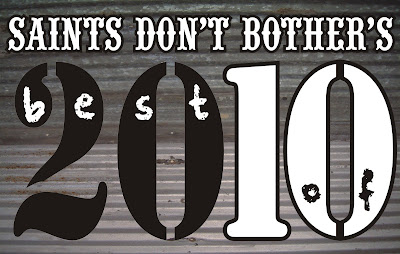 
2010 Knoxville Concerts in no order, and I’m glad a save my ticket stubs in my trusty ticket stub book:

Kris Kristofferson – Tennessee Theatre 1/31/10 – A Legend perfoms. A Legends Kills. A Legend shook my hand and took a picture with me. I’ll never forget. Look up the songs he’s written if you’re unfamiliar with his body of work. He even surprised me with a couple at the show.

Mastodon – The Valarium 5/21/10 – I was surprised I had my head left after they tore it off, much less my ears. And their visuals projected on the screen behind them blew my mind just as quick as their audio assault did my ears.

Tift Merritt – The Square Room 6/23/10 – An absolutely gorgeous sound and show. Check her out if you don’t know about her.

Weird Al Yankovic – Tennessee Theatre 7/8/10 – Say what you want…the man puts on a hell of a show, and has more hits (and costume changes) than most of your favorite bands… COMBINED.

Black Crowes – Tennessee Theatre 9/15/10 – I finally wasn’t disappointed, not even one bit, after seeing the Crowes for the umpteenth time. Solid show, start to finish.

Foothills Fall Festival – Maryville – 10/8/10 through 10/10/10 – Finally got to see Tracy Lawrence…never saw him in the early 90s, when he was big…and I was 12. Good festival all the way around too. Fantastic people watchin’ too, if you’re in to that kind of thing...

Slayer, Anthrax and Megadeth – Knoxville Coliseum 9/30/10 – What bit of ears and a head for a metal show that I had left after the Mastodon show were completely blown away and blown off by three of the four heavyweights of thrash metal…why couldn’t we get Metallica here to finish me off? Kerry King of Slayer might be the Devil himself.

Rogue Wave and Midlake – Bijou Theatre 10/5/10 – Took the fiancée to see one of her faves Rogue Wave, so it was just a nice time to see her enjoy a show, since she puts up with so many random shows of mine (as you can tell by this list). Both Rogue Wave and Midlake put on a great show. Midlake may be the best band with a flute since Marshall Tucker and Jethro Tull. Bonus points for Midlake since they had two flutists at one point. Midlake = winner of the flute-off.

Travis Tritt – Cotton Eyed Joe 10/7/10 – 90s country rocker gives a solo show at the Cotton Eyed Joe, and doesn’t disappoint a sold out crowd. Tritt played all the old favorites and the newer ones too. I spoke with TT for a moment and tried to convince him to do another project with Marty Stuart…For what it’s worth, he just smiled and laughed, so I don’t really know.

Social Distortion with Lucero (and Frank Turner) – The Valarium 11/9/10 – Best concert of the year by far…of course Social D is my #1 favorite band of all time, and they were playing a show in Knoxville with another of my top ten bands Lucero. First time Social D had been here since ’92 at the Bijou I’m told, so it was a big deal to us fans. I had a big time, as did the rest of the crowd. I just wish I could remember the last half of the show…
Posted by Hollywood at 10:24 PM