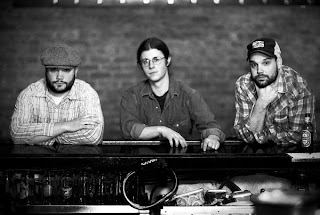 Today kicks off Backyard Tire Fire's tour, with The Old Ceremony, opening for the Squirrel Nut Zippers, beginning in Asheville, NC at the Orange Peel. On Thursday, they will be here in Knoxville at the Bijou Theatre. Tickets are still available here, and I suggest you get them now, as there will probably not be many, if any, left on Thursday night at the box office. Backyard Tire Fire are touring in support of their newest release The Places We Lived, out now on Hyena Records.

Just before the tour kicked off, we caught up with Ed Anderson, the vocalist, guitarist, driving force and all around utility player for Backyard Tire Fire, for a few questions as they geared up for the tour and their upcoming stop in Knoxville. See what Ed had to say:

BTF: this will be our first show in Knoxville and we’re excited about it. Always enjoy Chicago, NYC, san fran. Love the Georgia theatre in Athens. El Macambo in Toronto is a cool room. We’ve been lucky to play a lot of great old theatres like the Blue Note in Columbia, MO. Charlie Chaplin played that room!


SDB: I have been a fan of the Squirrel Nut Zippers, who y'all are touring with now, for a long time, dating back to early high school...How did you get hooked up with them and how's the tour going? Any surprises or stories that you are dying to share? Any anecdotes from the road?

BTF: we haven’t started with them yet but look forward to it. Our first show is in Asheville, nc on oct. 27th at the Orange Peel. Not sure how we got hooked up with the shows…


SDB: I saw that y'all opened for Reverend Horton Heat and Nashville Pussy earlier in the year-- how was that and how did that come to be? All three of y'all are totally different, which is great to see shows like that, but the three of y'all on the same bill sounded strange to me at first. That show consisted of Psycho/Rockabilly, Southern Rock/Punk/CowPunk and y'all. Also, y'all have played or will be playing with Los Lobos and Rose Hill Drive recently. What were the crowds like and how did they respond to BTF, especially for the Rev and Nashville P?
BTF: not really sure how we got on the rev. tour, but it worked out well. Nashville and the rev. and all of the folks that work with them are good people that we enjoyed being around on a daily basis. Three very different acts, but all very rooted in rock and roll.


SDB: There have been several personnel changes over the years. How have these personnel changes affected BTF? Obviously, these changes were made for the better, but what is different now than before? How is it with your brother in the band? Any "brotherly love" quarrels and shenanigans?

BTF: going from a four piece to trio, was quite different at first, but once we started gigging a lot as a three piece, it became comfortable. We can always pull it off as the trio, but we’ve found that it’s nice to add someone into the mix every now and again.


SDB: Tell us a little about your new album "The Places We Lived". It is grabbing alot of attention on the blog scene and by word of mouth. How does it compare to your past albums and EPs?

BTF: all of the studio stuff has been recorded on analog tape. This one is a little different stylistically in that it has more piano based songs and can be a bit more pop at times. I think it’s the best thing we’ve done, but then I always think the newest stuff in the best. You learn more as you go in the studio and as a writer you know?


SDB: BTF's sound is quite it's own...actually BTF's sounds are your own, as most songs on the new album take shape all their own, and are different from the song before. The Places We Lived is one of the most musically diverse albums that I have heard in some time (that I actually like and it goes together). Some of the songs are poppier like "Time With You"; some are slower, soulful piano based songs like "Rainy Day", "Home Today" and "One Wrong Turn"; some are piano driven with a dive/honky tonk sound like "Everybody's Down"; some are good old fashioned rock songs like "How in the Hell Did You Get Back Here" and "Welcome to the Factory"; and some are just a sum of the parts: "Shoulda Shut It", "Legal Crime" and "The Places We Lived".

Is there a different thought process to writing these different styles of songs, or was it planned for the songs to all sound different, but still related?

BTF: it’s all done in pretty much the same manner. Not a whole lot of thought put into what style I’m gonna write. Sometimes has to do with what I’ve been listening to. Generally I’ve got an acoustic guitar in my hands when I’m home or I’m at a piano tinkering around. Stuff starts to happen and I let it take me wherever it goes. Not really thinking about genres or any of that.
SDB: Who/what are some of your biggest influences, and what did you take from them?- neil young. Do what you want to do. Play what you want to play. And respect the music. How have the homebase/hometown relocations over the years and the personnel changes affected your music and your outlook on your music and the band? You went from Asheville, a pretty cool, artsy city, then y'all pack it up and headed South to Athens, an obvious hotbed of indie rock, beginning with REM and B-52s (and more) and now the Drive-By Truckers, Dead Confederate, The Whigs (I could go on and on...) and now to Bloomington, Indiana, which to me and alot of people doesn't exactly say "rockin'" to us. Why there and what's the town like?

BTF: IT’S BLOOMINGTON, IL. NOT INDIANA. It’s a college town, I went to grad school there a long time ago. It’s close to Chicago. Cheap to live. Three major interstates roll through town. Lots of our friends live there, etc. honestly we spend most of our time in the van and hotel rooms and bars.
SDB: Sorry about the Indiana/Illinois mistake...I realized that I did that as soon as I sent it. Sorry!!
BTF: no worries on the IL/IN. although nobody from IL wants to be known as being from IN. it's like the red headed step child. like Jersey and NYC :-)


SDB: A few of the new songs talk about coming back home and spending time with someone in particular. Between all the moving around to different areas of the country and the touring, does the road take it all out of you and have you missing home, or do you love being out and wouldn't trade it for anything...and everything and everyone at home will just have to wait til you get back? Anyone in particular that "Time with You" and "Home Today" were written for or about?

BTF: when we’re home we want to get back on the road. When we’re on the road for a long time, we’re ready to get home. Grass is always greener you know? We love what we do, and are lucky enough to have folks at home that are cool with us being gone as much as we are. Time with you and home today are both written to my wife. In fact, time with you is written from her perspective using her words from a phone conversation we had on the road.


SDB: Besides already having a fairly extensive catalog (several albums and a couple EPs), without blowing your showmanship secrets and giving away surprises for the show, do you play covers or do anything in particular to surprise the crowd with that "Oh, Wow! I can't believe they are doing that" feeling and moment? Any trick or treats that y'all will be serving up to Knoxville on the eve of Halloween?

BTF: we’ve got lots of covers up our sleeve. Usually play about one a night. When we do somebody else’s stuff, we try to play the more obscure songs. Which is probably more fun for us than anybody else. We’ve done an older Alejandro Escovedo tune for years and I think there’s been one or two people that have known it. Sure love playing it though! What's your favorite thing about performing live?-sweating. Screaming. Raising hell. Making people think about things. Watching folks let loose.


SDB: Do you have a favorite song to play live, and if so what is it and why?

BTF: I like playing them all. Although there is a steve earle song called F the CC that we cover that I enjoy because of the subject matter and the fact that I get to say the word fuck about 30 times in 3 minutes.


SDB: Do you have a favorite song that you've written? If so why and is it the same as your favorite one to play live?


SDB: Is there a song out there that you love that you didn't write and wish you had?


SDB: What are 5 artists/records that you've been digging on lately that you might suggest to our readers?


SDB: Finally, my fellow blogger "Davy Vegas" and I have a theory that the single greatest sound on the face of the earth is that of a well-played steel guitar. Is this a theory you can support or do you have other thoughts on the subject?

BTF: yeah, pedal steel is an artform. Our friend Jerry “Muttonhead” Erickson that plays on our stuff is simply amazing. He’s been doing it for at least 30 years and can really make it sing. Absolutely love the sound of pedal steel being played by someone that knows the instrument. I feel the same way about a Hammond organ being played through a leslie cabinet. When manipulated well it can sound like a fucking carnival.


SDB: One last question-- where did the Backyard Tire Fire name come from and how was it decided that that would be the name?

BTF: we got our name from the Springfield Tire Fire on the Simpsons. just kinda rednecked it up..

Also, check out BTF's brand new video for "How in the Hell Did You Get Back Here", directed by NYC indie filmmakers, Filipe Bessa and Nick Schwartz. It was shot in BTF's hometown of Bloomington, IL. Check it out:
Posted by Hollywood at 10:29 PM