The Misfits w/ the American Plague 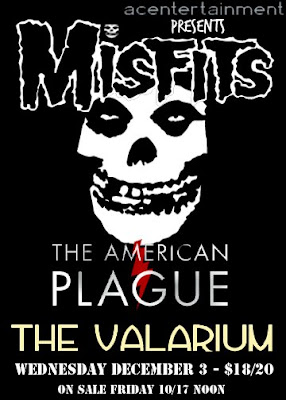 Tickets on sale tomorrow at noon here. Get some.

As I mentioned last year about this time, I saw the Misfits at the Orange Peel in Asheville and it was a great show, despite Jerry Only over-vamping his way through the show, covering all the old hits such as "Skulls", "London Dungeon", "Hollywood Babylon", "Die Die My Darling" and about twenty others sans-Danzig. With the edition of Black Flag's Dez Cadena, the 'Fits rumble through Black Flag classics like "Six Pack" and "Rise Above". All in all, it's cool to hear the songs, whether or not it's the O.G. Misfits...but these days, that's the way it is.

Opening will be local veteran rockers The American Plague, who opened for the New York Dolls in 2006. If you haven't caught them yet, catch'em now-- you never know when they might pack it up and take it to the big city.
Posted by Hollywood at 9:31 PM