In Cahoots is our newest feature here on Saints Don't Bother where we talk with some of our favorite bands and artists about who knows what. In the inaugural edition, we talked with, well...we emailed with, Joey Kneiser of Murfreesboro rock/alt-country-esque band Glossary. Joey is the main singer, writer and guitar picker for one of my favorite bands of the decade. 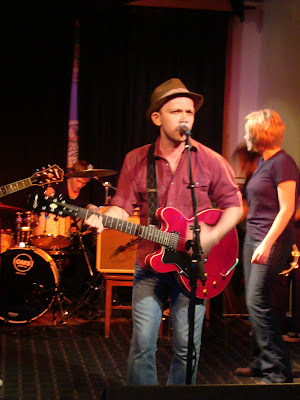 The last few Glossary shows I've seen in Knoxville have been in different places each time (Pilot Light, a little old church way out in Lenoir City years ago, the Corner Lounge, and now Barley's a few times). Which of these is your favorite place to play, and what is/are your favorite place(s) to play elsewhere and why?
We like all the places we've played in Knoxville, really. We just want people to be there, so it doesn't matter where it is, as long as people come. A couple of our favorite places elsewhere are the White Water Tavern, in Little Rock Arkansas, and the Bottletree in Birmingham. Both of those venues are very band-friendly, they really take care of us when we play there.
No doubt touring is rewarding but also tough and taxing physically and mentally. How do you stay focused/motivated/energized during a tour and stay cool with your bandmates/friends/your wife Kelly?
Touring is tiring and a lot of work, but it's fun work. You get to do what you love doing every night, and it's immediately gratifying because you get to see if people like what you're doing. We've been a band over ten years, so at this point nothing is going to make us not get along that a show won't fix.

I didn't think that your wife Kelly was always in the band. How did it come to be that she joined the band? How did the rest of the band handle that-- was it a breach in Boys Club rule? In the last few years, a few members have come and gone in Glossary; how have these personnel changes affected Glossary?
Before Kelly, many years ago, there was another female singer in the band, and when she quit we asked Kelly to join. So it was never a Boys Club. All of our personnel changes have ended up making the band better, and tighter in the musical sense and in the friendship sense.

Do you have a favorite song to play live, and if so what is it and why?
I don't have a specific favorite...I like playing all the songs.

Is there a song out there that you love that you didn't write and wish you had?
Millions of them. There's just too many...

Tell us a little about your schedule for a new album. How will it's sound and themes compare to "...Better Angels", as well as your other albums "FWIDB", "...Midnights" and the EPs?
The album is scheduled to be recorded in January 2009, and hopefully will come out as soon as possible afterwards. We hope that it sounds good, that's pretty much it. We just want it to sound like us, but like we've progressed, gotten better than we were before. The record is going to be called "Feral Fire", and the themes are based around longing to find out what you're supposed to be doing, who you're supposed to be with, listening to that little voice in your head and not being afraid to go for what you want.

There's always been that DIY feeling and movement in rock music, maybe more so now than ever. Kelly and Bingham told me that y'all physically put together the last album's packaging on your kitchen table, and that y'all designed it all. How has the "Do It Yourself" attitude affected your music and your outlook on your music and the band, as well as the future of music/record business as a whole?
It's affected the band 'cause it's forced us to figure out how to do all this ourselves. Bingham owns a screen-printing business that began from us making t-shirts on the floor of my old apartment. Todd learned how to pay pedal steel because we couldn't afford to keep paying someone to play on our recordings. The whole band is based on do-it-yourself, we've never had much outside help since the band started. It's affected the music business in that it's almost caused the collapse of the music business...now bands can do for themselves what traditionally you've had to have a label to do. A label's primary job was to get you on the radio and in record stores, but radio is almost dead and the brick-and-mortar store is on its way out.
What's your favorite thing about performing live?
Trying to make a connection with the audience, trying to convince people that you have something that is worth their time. And also just getting to play with my friends.

Glossary doesn't play many covers (I don't remember hearing any over the years, at least not knowingly, and that is ok with me as I love your music). Besides already having a fairly extensive catalog and repertoire, why do you not play covers?
We do have several covers that we play, but most of the time we're still an opening act and only have 40-45 minutes, so we try to squeeze in as much of our stuff as we can. But many a night when we have enough time, we bust out a Neil Young or Bruce Springsteen song; lately we've been into contemporary covers and have done My Morning Jacket and the Hold Steady.

I have always wanted to see Glossary play with the Drive-By Truckers and Lucero on the same bill. Then it happened kinda, with your recent tours in the spring with DBT and then this summer with Lucero. Tell us about Todd Beane and Mr. Jimmy playing with fellow Tennesseans Lucero. How did that come about, and what's next for them? Will there be any more DBT/Lucero/Glossary happenings in the near future? Possibly all three together so I can cross that off my list of things that I need to witness.
We've known both lucero and DBT for years, and they've both reached the point in their careers where they're able to take us out opening. Todd and Mr. Jimmy just started sitting in with Lucero, and it turned into playing with them whenever they're available. Todd's been adopted as their 5th member of the band. Todd will be on tour for the next month or so playing with Ben Nichols on his solo tour. Hopefully we'll get to open for Lucero and DBT in the future (unless they decide they don't like us anymore). All three together?...I wish. I want to cross that off of my list, too.

You've been playing some solo shows lately as well. How are these shows different from Glossary shows for you. Do you play Glossary songs in your solo sets? How do you know if a song is a Joey song or a Glossary song, if they are indeed different.
It's not too much different. I do play some new songs and some covers. But right now I don't really have time to focus on anything but Glossary, so it's all about Glossary songs. But I do plan on making a solo record... it's been on my mind for a long time, I just haven't had any time.
How did gigging around Murfreesboro, a growing city/suburb of Nashville affect your musical interests, influences, and playing in a band. Is it harder to be in a band and be taken seriously, as everyone in Nashville is playing music it seems? Has living in that area helped or hurt your band? And how did the steel guitar come to be a staple in Glossary's sound...kind of odd for a "rock" band...?
I think being in this area has helped us, I don't see it as hurting us. Regardless of being in Nashville, which is a music mecca, we're also pretty centrally located in the country in general, so it's easier to travel to most cities than it would be if we were on the east or west coast. Living in M'boro specifically hasn't really affected musical influences or interests, but living in the South definitely has. The pedal steel became a staple from trying to use it on How We Handle Our Midnights, and Todd just picking it up and becoming good at it fairly quickly. But really it was from hearing it used in Pavement's song "Father to a Sister of Thought", which Todd and I both loved...Doug Easley played steel on that.

Finally, my fellow blogger "Davy Vegas" and I have a theory that the single greatest sound on the face of the earth is that of a well-played steel guitar. Is this a theory you can support or do you have other thoughts on the subject?
I absolutely agree. The pedal steel is so close to the sound of a crying voice; it has that lonesome whine that if played correctly can make the hairs on the back of your neck stand up.

Posted by Hollywood at 5:24 PM