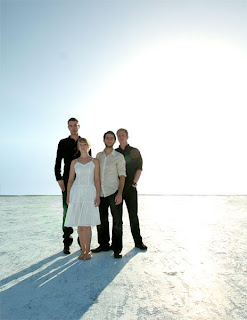 Don't know much about these guys, other than they are awesome. I heard a little bit of Murder By Death (yes, named after the old movie) back in the college radio days with the track "Until Morale Improves, The Beatings Will Continue" and a couple others off of Who Will Survive, and What Will Be Left of Them? album from 2003, but I sadly did not pursue them any further. I chose poorly.

Murder By Death blend punk rock, western-y alt-country and a small pinch of Southern boogie and shake music, with a lot of tremolo and reverb, and some eerie strings in the background just to round it out a bit. They have toured with Lucero...and for the most part, that will get you at least a listen or two in my book, along with instant cool points for association.

More to come on these guys and gal, as I will be getting to their newest album Red of Tooth and Claw soon. In the meantime, if you're around the Knoxville area, go see Murder By Death tonight at the Pilot Light with The New of the Moon. Show starts at 10 and will cost ya a cool $12.

Labels: Lucero, Murder By Death, Pilot Light, The New of the Moon