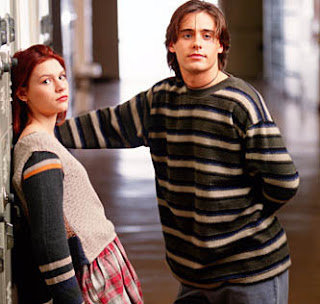 Jordan Catalano, err, Jared Leto, his brother Shannon Leto and the rest of the guys of 30 Seconds to Mars are being sued by Virgin Records for alledgedly not fulfilling their contract obligations from a 1999 contract to the tune of $30 million.

"Blah Blah Blah. I'm hot and you're not..." said Leto, as he went on to say that the contract is void due to California's 7-year contract clause... Read more here if you care. If not, and you are a My So-Called Life fan, you can read more about that here.

Oh, he was so dreamy. I didn;t know he was so smart too, knowing all those bug lawyer words and legal sentences and numbers. I'm going to have to write about him in my diary tonight.

Dear Diary,
These bad men are trying to sue my baby Jordan and take away all his hard earned money that he earned being so dreamy. Just let me get a hold of those meany record label men. I'll save my Jordi from any danger that is heading for him, as long as he'll save me. But I know he will. Why would he not? We are destined to be together. After he wrote, played and sang me that song about being 'sedated' on his tv show, I knew we were destined for true happiness...

Oh no, I forgot that this isn't my diary. Whoops. Please erase that last part from your memory. That is private information! How dare you intrude on my privacy.

Posted by Hollywood at 5:46 PM