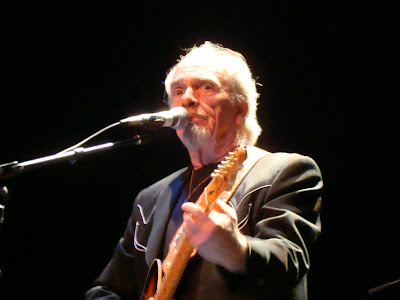 Last week, Vegas and I had a can't-pass-up opportunity to see 'The Legend' Merle Haggard at the Tennessee Theatre on Thursday, 8/7. A buddy of ours called me at 5 that afternoon and said he had a pair of tickets to Merle and that he couldn't go, and he asked if we wanted them. After debating for oh, say, .00000001 seconds, I agreed to take the tickets off his hands...only because I didn't want them to go to waste. Yeah, that's right...

Anyways, this was my second experience with Merle, and Vegas's first. We both agree that if you have the chance to see the Hag, take it! Do not wait 'til next time, or say the tickets are too expensive, or have other plans that night like washing your hair and re-lacing your cowboy boots. Trust us. Merle does not disappoint. This wasn't quite as good of a show as when I saw Merle from the third row in the Ryman in 2006 (I think), but still, it was Merle. You can't go wrong. He doesn't put on a bad show...just great shows, with varying degrees of 'amazingness'.

Ol' Hag opened with "Misery and Gin" and played many crowd favorites like "Swinging Doors" and "Big City" (two of my personal faves), as well as "Silver Wings", "I Think I'll Just Stay Here and Drink" and of course,


On top of these cornerstones in the church of country music, Merle played some lesser known gems such as "The Way I Am" and "Today I Started Loving You Again". And that's about where my memory, as well as my notes that were intended to resemble a setlist, started getting hazy...Merle might say that, on occasion, the bottle let him down. Well, it certainly did not let me down that night. Nor did it let Vegas down either.