Waiting on a Sunday afternoon 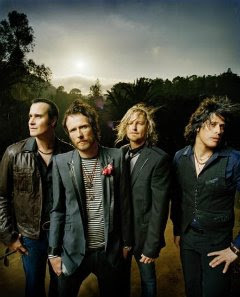 Yes, finally, tomorrow. Nashville. The Grand Ole Opry House. Stone Temple Pilots. I have waited over 15 years to see these guys. I even gave up going to Bristol for the weekend in St. Genevieve (the RV) and partying like Weiland for the weekend at the race to go see STP (there are two races at Bristol a year. How many more chances will I have to see STP? Figure those odds and then argue if you want).

Despite never seeing STP in their "hey day", I have seen Weiland and the DeLeo brothers in various band incarnations like Velvet Revolver and Army of Anyone. However, I have never seem drummer Eric Kretz, who I think is one of the most under rated and under appreciated drummer of the 90s and one of personal favorite drummers (he helped me to learn how to play when I'd turn on their records as loud as my little boombox would go, nearly to 11, and play my drums over their songs until I figured them out. The same went for Nirvana, Green Day, Offspring, Pearl Jam, etc. I obviously grew up in the 90s). As you can tell, I am totally pumped about this show, and simply cannot wait. It'll be like I'm 15 years old again listening to Core and Purple in my parents' downstairs, being mad at the world, thinking I'm a little badass and that I know everything... Which I was and still am, and yes, I did and still do too.

We have scouts at the Atlanta show tonight, so details to come as they develop and come in to SDB HQ. Early reports of the show are "Fuckin' awesome" from VH and her crew, despite no "real surprises" tonight she said. We'll see what happens tomorrow night in Cashville.

Opening the show will be the Black Rebel Motorcycle Club with their spacey garage sound, who I've seen at least once that I remember, as they opened for the Kings of Leon last year at the Tennessee Theatre. They are cool, but let's be honest- the mindset of everyone there will be "Hurry and play so STP can come out and rock our faces off like it's 1995!"

More to come on this.