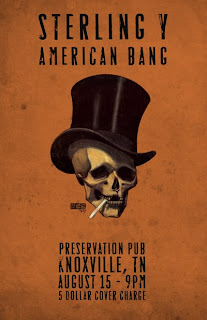 Go check out the hottest band from Nashville (and Tennessee!) in the last few years, probably decade, American Bang, at the Preservation Pub in Market Square tomorrow night! You will not be disappointed by the Bang's blend of straight up rock n roll and southern jam-boogie. Take AC/DC's electricity, mixed with the Kings of Leon's tone and vocal styles, mixed with the chops of old, old, ooooooollllddddddd-school early Skynyrd (yes, I said it) and add just enough of a sprinkle of originality and freshness and you get American Bang. The Bang were signed to Warner Brothers Records a year or two ago, and have ben working on their debut for what seems like an eternity. They put out a 10 or 12 song album in 2006 on their own and it was outstanding- a good ol' whiskey soaked, cigarette smoke-filled rock-n-roll record all the way through. Formerly known as Bang Bang Bang, the Bang ended up changing their name to American Bang for legal reasons once they were signed due to another band with the same name.

Here's a video I found of my favorite song of theirs, Traffic, with a long intro:

But don't take our word for it here at SDB...Come see them...it's only $5 anyhow. The Bang are playing with Sterling Y tomorrow night, and with The Whigs for other parts of the tour!

PS: If you haven't heard The Whigs' latest album Mission Control, grab it this weekend and turn 'er up. (If you happen to be in the Chattanooga area Friday night, The Whigs are playing the free concert series NightFall downtown in Miller Plaza. You know what you need to do.)

PPS: If you happen to be in the Nashville area, My Morning Jacket (who?) is playing at Riverfront Park Friday night as well...It's good to be in Tennessee this weekend.
Posted by Hollywood at 8:01 PM